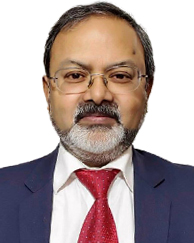 4. He has served in the Ministry of Commerce, GOI, where he handled economic relations and foreign trade issues with Central European countries. He also worked as Deputy Secretary in charge of Bangladesh affairs. Later, he headed the e-Governance and Information Technology Division of the Ministry from 2008-2011.

5. He has also served in Indian Missions in Tehran, The Hague, Kathmandu, Ankara (as DCM), and Yangon (as DCM).

6. He has working knowledge of Persian, Russian and Nepali languages.

7. Shri Bharti had his schooling from Netarhat Residential School, Jharkhand. He is B.Tech in Electrical Engineering from the prestigious Indian Institute of Technology, Kanpur.

8. His wife, Ms Anamika, is a former officer of the Government of India, an art historian and an educator. They have two adult sons