Indian Coast Guard Ship Shaurya, visited Jakarta, Indonesia, from 17-20 November 2019. The port call was part of the three-nation Overseas Deployment (OSD) of 2019 and also coincided with the celebrations of 70 years of diplomatic relations between India and Indonesia. 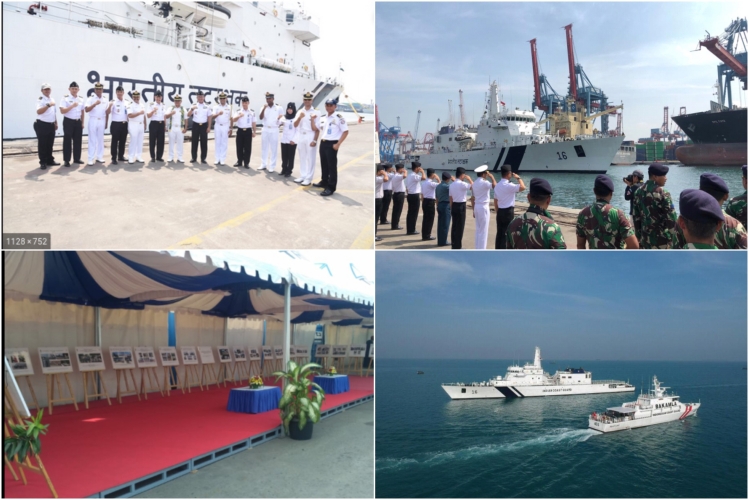 The ship is commanded by Deputy Inspector General Jyotindra Singh and is the fifth in the series of six 105m Offshore Patrol Vessels (OPVs) designed and built indigenously by Goa Shipyard Ltd. Indian Coast Guard (ICG) has commissioned the ICGS Shaurya offshore patrol vessel (OPV) into its fleet in goa on august 12, 2017. ‘Shaurya’ meaning courage is a projection of Indian Coast Guard’s will and commitment “To Serve and Protect” the maritime interest of the nation. The ship is homeported at Chennai, Tamil Nadu.

The ship has a displacement of 2350 tons and is propelled by two 9100 kW diesel engines to attain a maximum speed of 23 knots and has an endurance of 6000 nautical miles at cruising speed. The vessel is fitted with state-of-the-art navigation and communication equipment, sensors and machinery. The features include 30 mm CRN 91 Naval Gun, Integrated Bridge System (IBS), Integrated Machinery Control System (IMCS), Power Management System (PMS) and High Power External Fire Fighting System.

Significantly, this vessel has registered excellent performance at sea during various trials, clearing all trial parameters comfortably and achieving over 26 knot speed, as against contractual speed of 23 knots.  Despite 5.35% higher displacement as compared to previous ships, fuel efficiency is improved by 16.36%, endurance is increased by 14% besides much improved crew-comfort, ergonomics and head space etc. It has 18% smaller turning circle diameter, thereby providing improved maneuverability and capability to get into combat position expeditiously.

The ship is designed to carry one twin engine light helicopter and five high-speed boats including two Quick Reaction Inflatable Boats for swift boarding operations, search and rescue, law enforcement and maritime patrol. The ship is also capable of carrying pollution response equipment to contain oil spill at sea. The sustenance and reach coupled with the latest and modern equipment and systems, provides her with the capability to perform the role of a command platform and accomplish all Coast Guard charter of duties.

During the visit, the ship’s officers and crew interacted with their counterparts from BAKAMLA (Indonesian Coast Guard) and Maritime Academy of Indonesia. Subject Matter Expert Exchange (SMEE) was conducted on Maritime Law Enforcement and Search & Rescue Ops while practical drills were conducted by teams from both sides in VBSS i.e. Visit Board Search & Seize.

The ship was open for visitors on two days and a special visit of children from the Delhi Public School Jakarta was organised. The Ambassador of India to Indonesia, H.E. Shri Pradeep Kumar Rawat also hosted a reception on board the ship for members of Bakamla and the Diplomatic Corps. Vice Admiral Achmad Taufiqoerrochmam, Chief of Bakamla graced the occasion. At the venue, a photo exhibition to commemorate 70 years of diplomatic relations between India and Indonesia was organised by the Embassy of India, Jakarta and it showcased a historical perspective of the various instances of high level interactions since both countries attained their independence, progress in defence cooperation, bilateral exercises, HADR and medical support, interaction of defence industries etc.

On completion of the stay in harbour, the ship carried out out PASSEX with ships of Bakamla and proceeded for the next leg of her journey towards Darwin, Australia.